THE TRIUMPH OF GRACE 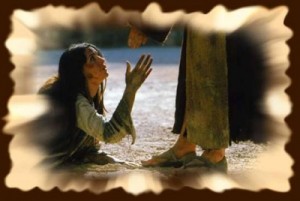 The Pharisees laid the perfect ambush . . . so they thought! They seized an adulterous woman to show Christ’s contempt for Moses’ Law. It would prove Jesus was soft on sin and rejected God’s judicial sentence on lawbreakers. There was no need for a trial, because her conduct had convicted her—she was caught “in the very act” (John 8:4). Here’s the dilemma Christ’s enemies created: If Jesus corroborated with the Law the Pharisees could accuse Him of hypocrisy because He made His reputation on being the “friend of sinners.” If He acquitted her, they could accuse Him of breaking Moses’ Law and then place Him on trial. But nothing caught Christ by surprise; He discerned their duplicity.

The Pharisees stood silent, regally composed, waiting for Christ to fall into their trap. But with an omniscient gaze, Jesus appraised this armed mob and then gently said, “Whoever is without sin can be first to throw a stone” (8:7). Instantly, guilt pervaded the atmosphere. Christ’s words had pierced their hearts, disarmed their hands, and dismissed their actions. He had “captured the wise in their craft and thwarted the scheme of the cunning” (Job 5:13). It was another event proving Jesus was the Eternal Word; that He was the Sovereign Source of both Old and New Testaments. And while the religionists accused Christ of disregarding the Old Testament Law, it actually reveals how He fulfilled it. Notice how John discloses this:

When the Pharisees brought this woman before Christ, He “bent down and wrote on the ground with his finger” (8:6). Had the content of this writing mattered John would have preserved it. What’s important is, Christ used His finger to write! The significance of this goes back 4000 years where Exodus 31:18 says, “When the LORD finished speaking to Moses on Mount Sinai, He gave him the two tablets of the Testimony, the tablets of stone inscribed by the finger of God.” Jesus’ actions demonstrated that the finger that wrote on Sinai’s stones had written in Jerusalem’s sand! And with equal authority Christ, the “Word made flesh,” wrote a new law—the Law of Grace!

Don’t misunderstand the Law of Grace. It is neither passive toward sin, nor does it overlook its penalty. Christ’s acquittal of this woman had not contravened the Old Testament Law for one reason: the final page of this story wasn’t penned in John 8, it was penned when Jesus died on the Cross. You see, from a judicial perspective the Pharisees were right—this woman’s sin demanded a death sentence and His new “Law of Grace” would make certain it happened. Christ would not ignore her sin or leave it unpunished. Jesus, the One who prevented the rocks from pummeling this woman, would accept her judgment!

Perhaps this woman stood in the crowd at Christ’s crucifixion remembering how He prevented her execution. The sin was hers and she should have suffered its penalty. But now she recognized the Law of Grace and knew Christ hadn’t dismissed it with a shrug of His shoulders. He had become her substitute and bore the full payment of it. Free grace? Yes! Unmerited grace? Definitely! Cheap grace? No! Now, whomever you are and whatever you’ve done, “go and sin no more,” regardless of what the Pharisees think of you (John 8:11). God’s grace abounds forever!

Devotionals for Personal or Corporate Worship Robert D. Pace Johann von Dannecker was the famed German sculptor of the 19th Century. After carving many sculptures someone approached him and requested... END_OF_DOCUMENT_TOKEN_TO_BE_REPLACED