THE BEGINNING OF THANKSGIVING DAY IN AMERICA 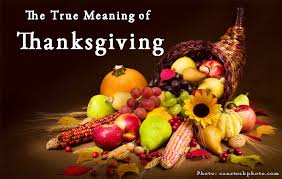 In the early 20th Century, Guideposts Magazine published a story by the poet, William Stidger. It disclosed a letter that Stidger had written to his literature teacher, which thanked her for instilling a love for poetry. Stidger’s teacher wrote back: “I want to let you know how much your letter meant to me. I am an old lady in my eighties, living alone in a small room. I taught for fifty years, yet in all that time, yours is the first letter of appreciation I have ever received.”

Sadly, gratitude is a virtue lacking in many people, which is one reason Christians should emphasize the Thanksgiving Season.

George Washington, acting upon a Resolution by the US Federal Congress, named November 26, 1789 as a day of thanksgiving to God. Subsequent Presidents announced days for “national thanksgiving” but in 1863, it was Abraham Lincoln who made Thanksgiving Day official. This national holiday was instituted to express gratitude toward God for His providence, grace, and goodness. It was done in agreement with how the Pilgrims, too, had set aside one special day each year to express thanks to the benevolent God who had directed them to America.

Today, the essence of Thanksgiving is largely forgotten or ignored, as it has been transformed into an extended weekend of recreation, shopping, and watching sport events. But the Church is one institution that can keep this sacred holiday in perspective, and use it to glorify God.

As your friends ask how you will celebrate this holiday, let them know, that whatever else you do, your plans will include a time of thanksgiving to God. As you worship God, thank him for how his grace has enriched your life. Recount his answers to prayer this year. And make certain to show appreciation for how Christ has bestowed his goodness and mercies upon you and your loved ones. However you celebrate Thanksgiving Day, make certain to place thanks at the center!