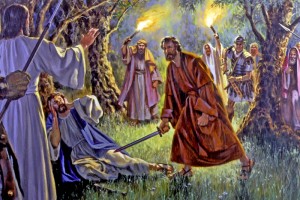 Most Christians don’t remember Malchus but he was one of the most recognized persons in Jerusalem during the First Century. He was the personal assistant to Caiaphas, the High Priest, and his chief duty involved listening. He was the “ear” of Caiaphas. Malchus listened to the Roman militia that occupied Jerusalem. He listened to the Pharisees, the Herodians, even the common-folks. And he reported all that was significant back to Caiaphas. It’s strange that you hear nothing of his name until John 18:10 where the Bible says “Then Simon Peter, having a sword, drew it and struck the high priest’s servant and cut off his right ear. (The servant’s name was Malchus.)” Although his name appears in parenthesis there is nothing parenthetical about this narrative. Here was Malchus tracking Jesus, most likely, for the three years of His public ministry. Imagine what this “listener” had heard Jesus say: “I am the way, the truth, and the life.” “He that comes after me shall never die.” “He who has seen the Son has seen the Father.” But was Malchus listening? It seems unlikely because he proceeded to make an agreement with Judas to betray Christ. It occurred on Thursday night of Passover when a mob sought to seize the Son of God. From a torch-lit night Jesus inquired: “Who are you looking for?” Someone said, “Jesus of Nazareth.” Jesus only spoke three words, “I am He,” and the entire mob fell to the ground; even Malchus! But was he listening? Realizing Christ’s life was in jeopardy, Simon Peter unsheathed his sword and severed the right ear of Malchus. Blood gushed out and drenched his garments. His head throbbed with pain. But the mob, now fearing Christ’s very words, didn’t dare retaliate. Jesus was in complete control. That’s when He bent over, scraped-up Malchus’ ear, and restored it. To everyone’s amazement, the Suspect became the Specialist and Malchus was healed. Pain vanished, eyes widened, and the night fell quiet. Now, without a anything hampering communication, Jesus looked in his face and signaled: “Malchus, can you hear Me now”?

What about you? Has God been speaking to your heart about something? If so, “Can you hear Him now”?

(This devotional is extracted from the full-length sermon located at: https://revelationcentral.com/the-malchus-generation/ )

This outline can be used as a day-to-day devotional guide... END_OF_DOCUMENT_TOKEN_TO_BE_REPLACED