All Topics, Authority, Faith, Power, Teaching Comments Off on THE LOST AXE HEAD 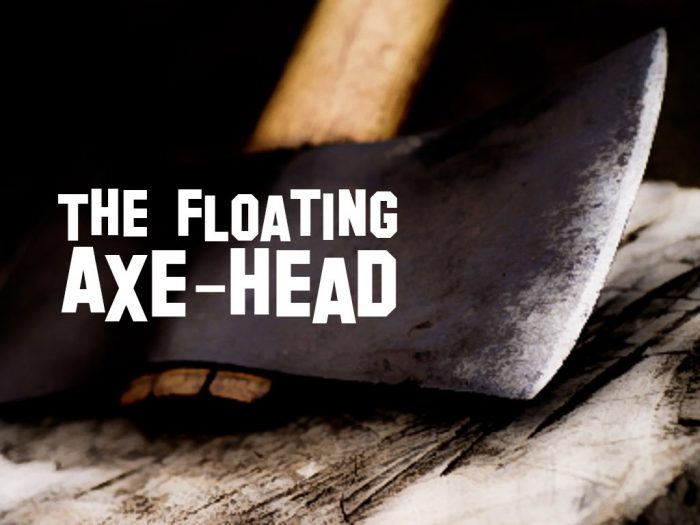 Whatever else can be said about this narrative, we should understand that it focuses on, revolves around, and wouldn’t be a story without an axe head that flew off its handle. Had the axe head remained attached to the handle, there would have been no emergency, no need to consult Elisha for a miracle, and no need to exercise faith.

In summary, here’s what happened. Elijah had started a School of Prophets that had continued expanding under Elijah’s successor, Elisha. There were now three cities where the School of Prophets existed: Jericho, Gilgal, and Bethel. The facilities here in Gilgal had grown to where the men were cramped. Thus, they undertook an expansion project. So with Elisha’s approval to enlarge their facility, the prophets went to the river and began cutting down timber. Each man took turns striking blows against those thick lumbering trees until, finally, the axe head flew off the handle and sank into the Jordan River.

(Transition) At first glance, this mishap seems trivial and unnecessary for inscribing into the eternal pages of Holy Writ. But this lost axe head created serious problems! That’s why I first want to investigate a series of problems this mishap created.

The Problem of the Lost Axe Head

Problem # 1: Misfortune happens even when believers are engaged in doing God’s perfect will. Have you noticed how quickly things can go awry when you’re doing God’s will?

(Illustration) Some years ago, a friend and I went to the streets to witness. We were outside a Bar sharing Christ when a huge man walked up and held a knife inches from my face. That’s some reward for preaching the Gospel! How would you like to witness in the face of a switchblade? Fortunately, everything went fine.

You see, there are times when things seem to turn against us when we pursue God’s will. That’s what this story of the lost axe head shows. While the Bible doesn’t say why this ax head broke free from the handle, there are two explanations:

One, this prophet was careless. Not being a professional axeman, he didn’t know to monitor his equipment. (I have used axes like this. The kind that the handle always needs bumping back down into place.)

A second explanation for this accident is, this young prophet may not have been careless at all. He simply had an unavoidable mishap.

Remember again, that it is important not to jump to conclusions when we see problems in the Kingdom of God. Difficulty does not necessarily indicate a “project” is out of God’s will. Satan is known to impugn God’s work. Human miscalculation creates problems. Mistakes happen. But God with His providential mastery, is always in control. And
the Lord is supremely responsible for allowing this episode to occur. This will become evident later in this message, but for now, let’s move to the next issue:

Problem # 2: The Prophets had borrowed this lost axe head. Because this axe was “on loan,” someone in the Company of Prophets would have to pay for its replacement. And we can assume the young prophet that lost the axe head would become someone’s servant until he had worked off the debt. Remember, back in the 8th Century BC, iron was a valuable commodity! That meant someone was doomed for a lengthy time of servitude in order to repay the debt.

Problem # 3: The work on the prophetic quarters could not continue without a cutting device.

(Definition) Notice the definition of an axe: An axe is a tool of sharpness that assists men in chopping. The sharp-bladed head of an axe helps accomplish what men could not do without it.

Do you realize we need axes for many of God assignments? I’m not talking about a physical chunk of metal and wood. I am talking about an “axe” mentioned in the “Book of Acts.” God has given everyone here a very special instrument that was designed for your usage. He has placed something in your hand that makes you effective for kingdom service. It is an “axe” of the Holy Spirit that empowers you to accomplish God’s work. These “axes” are called gifts of the Spirit.

The Holy Spirit’s gifts, talents, and tools are the instruments that accomplish God’s purposes. It could be an ax of prayer, or giving, or teaching, or mercy, or serving, or encouraging. Just remember: it’s important to exercise your spiritual gifts.

Problem # 4: It would take nothing less than a miracle for this axe head to be retrieved from the bottom of the river. And that’s what happened!

I few moments ago, I mentioned how things sometimes go amiss even when we obey God. That’s why the Lord placed this story in the Bible. He wanted to illustrate His providential mastery of life and disclose how He can pull victory from the jaws of defeat. God is never constrained from resolving our problems regardless of how perplexing they are. Never! With that in mind, let’s re-examine how this lost axe head was reclaimed:

The Recovery of the Lost Axe Head

A. First, the young man rushed to Elisha and, with a flurry of words, explained his dilemma: “Oh, Man of God, we have borrowed an axe from a townsman and now it’s lying in the Jordan River.” You can hear the desperation in his voice; and that’s okay. There is nothing inappropriate or over-reactionary with this young man’s actions. He simply admitted his dilemma.

It’s not time to pray a faint-hearted prayer when you are faced with crisis. Hannah laments for the birth of a son. Bartimaeus shouts to be healed from the roadside. The Syro-Pheonecian woman pleads for mercy. Desperate situations beget desperate prayers!

(Transition) But now the case has been made and the young prophet has presented the dilemma to Elisha. And . . .

B. Now it’s Elisha’s moment! He listens carefully to each word of the story. He’s curious but without accusation. Why blame anybody who is serious about God’s work? Elisha understands the drama but he shows no emotion. There is something about men of faith that stare-down problems with divine aloofness. Men of faith don’t allow problems to overwhelm them because they know their God towers higher! Elisha, with calm repose asks, “Where did you lose the ax”?

(Insight) That’s a perfectly normal question for Elisha to ask. We do the same when we lose something of value. We ask, “Where did I last possess the object?” “When did I last see it?” Some people might disagree and say, “If God could give buoyancy to that chunk of lead He could also reveal where it fell in the water.” But remember, God is disclosing a secret here and this is my observation: Elisha’s simple question, “Where did you lose the axe,” demonstrates our need to identify where we lost our effectiveness in life.

But there’s more: This story doesn’t terminate with a whimsical memory of where you lost anything. The story of the far-flung axe head is about reclaiming our losses! So let’s continue.

C. When this young man identified the place of his loss Elisha moved into action. The Bible says Elisha took a piece of wood and threw it into the river. Within moments, the axe head swam to the surface of the Jordan and bobbed like a cork as the Company of Prophets looked on in stunned amazement!

Perhaps the imagery of this “stick” is obvious. That piece of wood represented the Cross of Christ. It shows that there is no salvation, no miracle, without Christ! It foretold how Christ upon that wooden Cross would raise us from the depths of sin and replace us to our rightful place.

D. But the story is not quite over. Listen to Elisha’s words once the axe head arose on the water. He said to those nearby: “Now take it up for yourself.” In essence, Elisha said, “Reclaim your usefulness and get busy again. Everything is alright.” And that’s what I hear the Lord saying to you: “The gifts and calling of God are irrevocable” (Romans 11:29). Reclaim and employ what is rightfully yours!

In conclusion I want to rehearse how you can reclaim your cutting edge with God:

1. Admit that you need God. Verse 5 says when the young man lost the axe head “he cried out and said, “Alas, my master! For it was borrowed.”” Don’t be ashamed to confess your mistake and ask God for help.

2. Identify where you lost your usefulness. Elisha was careful to inquire where the loss occurred in verse 6: “Then the man of God said, “Where did it fall”? This is where the young man stepped forward and pointed where the axe head flew into the river. We too should confess to God where we lost our blessing.

3. Work with God’s plan to restore your loss. Elisha said to the young man in verse 7, “Take it up for yourself.” So he put out his hand and took it.”

An axe handle without the axe head is but a memory of what “once was.” Let God restore whatever you lost. It’s time to reclaim your cutting-edge.

Disclosing Prophecies; Inspiring Hope for the Endtime Robert D. Pace It begins with deception—mass, unbridled deception! It is the infamous Endtime caveat that prevails above all others. In total, Christ... END_OF_DOCUMENT_TOKEN_TO_BE_REPLACED

PULPIT TODAY SERMON Robert D. Pace Introduction I want to talk to you on the subject of How the Bible Shows the World Its Days are Numbered. Many here know... END_OF_DOCUMENT_TOKEN_TO_BE_REPLACED