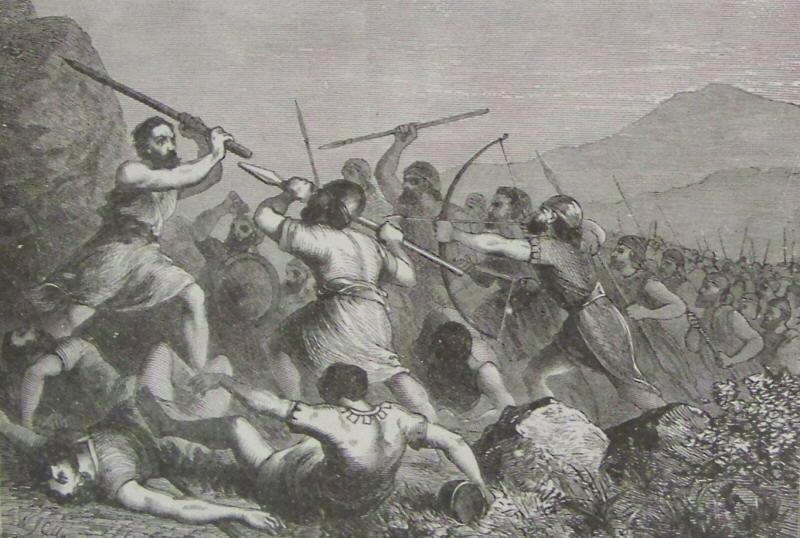 Born with the name Shamgar he was raised on a farm. Seasons of plowing, sowing, tending, and harvesting had broadened his shoulders and enlarged his angular frame with muscle. His labor had acquainted him with shovels, plows, and threshing sledges, but on this day, Shamgar’s primary instrument would be an oxgoad. Judges 3:31 says: “Shamgar the son of Anath . . . killed six hundred men of the Philistines with an oxgoad; and he also delivered Israel.” The Bible uses one terse verse to capture an unprecedented account of Shamgar conquering 600 Philistine soldiers in an open field, but there is nothing trivial about this story. However, the moral of this story can only be deciphered in context of Shamgar’s oxgoad. An oxgoad was an eight-foot stick that farmers used for plowing. One end was beaten into an iron point that was used for prodding the ox, while the other end was shaped into a chisel that was used for dislodging clumps of dirt from the plow. An oxgoad is an unconventional weapon for fighting armed soldiers of war, but at day’s end Shamgar’s field was littered with 600 Philistines and God was ready to induct His newest champion into Israel’s Hall of Fame.

What does this episode of Shamgar and his oxgoad illustrate? It shows that God has placed something in your hand that can defeat the enemy of your soul. God gives ordinary people ordinary weapons that accomplish extraordinary feats! It’s a Biblical precedent: Moses parted the waters with a staff; David toppled Goliath with a slingshot; Jael defeated a General with a nail; Gideon and 300 men lit torches and blew trumpets to overthrow an innumerable host. There is a reason God set this precedent. It’s because He wanted Christians to recognize that His power operates through human weakness. The weakness of God surpasses the strength of men. The foolishness of God surpasses the wisdom of men. While we may never understand why God made us a farmer rather than a pharmacist; why He made us seamstress and not a scientist; just remember, God can accomplish something remarkable when you let Him empower ordinary parts of your life. No more lamenting about your talents and gifts. Accept what’s in your hand. And confess with Paul: “I will glory in my weaknesses. For when I am weak, then I am strong.”

HOW TO BEAUTIFY YOUR LIFE

Devotionals for Personal or Corporate Worship Robert D. Pace Johann von Dannecker was the famed German sculptor of the 19th Century. After carving many sculptures someone approached him and requested... END_OF_DOCUMENT_TOKEN_TO_BE_REPLACED