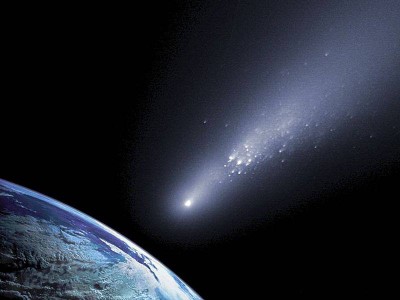 In the near future, the Lord will send dramatic signs that will demand mankind to recognize a disruption of life’s normal activity. This disruption will not be restricted to nations or even regions of the world. The drama will be unbounded and cosmic as the Bible shows the Solar System reeling with upheaval. And while many will ignore or reject the spiritual significance of these signs they won’t be able to deny their appearance. An irrepressible display of cosmic wonder will girdle the globe and arrest man’s attention. For years, Christians have employed the phrase “signs of the times” to describe the Last Days, but Scripture inverts the phrase and describes them as a “time of signs.” Jesus, the Prophets, and the Apostles knew that “signs and wonders” would appear in Biblical proportions! But what is a sign and what is a wonder?

Imagine it this way: the primary purpose of a sign is to dispense information; whereas, a wonder arrests our attention in a stunning manner. Thus, when the two words are combined we understand that “signs and wonders” are awe-striking acts of God that dispense vital information. And that’s why God will resurrect them upon the last generation of mankind. The Lord has awe-striking information to disclose!

With this explanation in mind, notice how Jesus said He would speak to the Endtime generation: “There will great earthquakes, and in various places plagues and famines; and there will be terrors and great signs from heaven” (Luke 21:11) This passage does not indicate a gradual emergence of signs, wonders, and global disasters. The urgency of the hour will create an abrupt, collective appearance of them. And it’s intriguing that the catastrophes emerge from under the earth, on the earth, and above the earth. Jesus said there would be: (1) “great earthquakes” [that’s beneath]; (2) “plagues and famines” [that’s upon]; and (3) terrors and great signs from heaven” [that’s above]. It’s all an inescapable triumvirate disturbance that befalls mankind.

While this prophetic scenario is frightening and inescapable, Scripture doesn’t predict these events to unnerve Christians. God has placed this warning in Scripture as predictive prophecy for the purpose of assuring Christians the Bible is true and their “redemption draws nigh.” Thus, the Lord of Grace will stretch the extremities of creation and pour forth dramatic signs that will capture man’s attention and affirm His Word. You see, God will not let mankind walk blindly into the Apocalypse. He loves us too much not to warn us!

(Note: This foregoing Prophetic Insight has been extracted from the DVD “The Days of Noah Return,” and can be ordered on the Resources page.) You may preview a brief excerpt below:

Imagine the perfect Endtime strategy designed to dispirit Christians and turn them from their Faith; something that would cause them to question all the Bible affirms is true. Through the... END_OF_DOCUMENT_TOKEN_TO_BE_REPLACED