Four thousand years ago Moses conveyed a cryptic blessing upon Israel designed for fulfillment in the “last days.” In Genesis and Deuteronomy Moses predicted that Israel would discover “blessings from the deep” (Genesis 49:25) and “treasures hidden in the sand” (Deuteronomy 33:19). When these Scriptures are cross-referenced it becomes evident that these fortunes regard Israel’s eventual discovery of energy resources.

It’s ironic that in the 1960s, Israeli Prime Minister Golda Meir said, “Moses dragged us for 40 years through the wilderness to the one place in the Middle East where there was no oil.” However, since the 2000s, Israeli geologists have explored for oil and their discoveries have been astounding: (a) Geologists initially 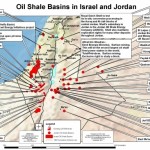 Today, facts confirm the Bible is true and Moses’ prophecy has found fulfillment. “Treasures hidden in the sand” have been unearthed! And today it appears that Israel’s crude oil sites will surpass the shale reserves of Saudi Arabia, the world’s largest oil producing nation!

However, in Deuteronomy 33:19 Moses also predicted that Israel would discover an enriching “abundance from the sea.” What did Moses mean here? Well, the western coastland of Israel is the Mediterranean Sea. And it’s not coincidental that in 2006 Israeli geologists discovered 122 trillion cubic feet of natural gas in the Mediterranean Sea. Consequently, after several years of building gas platforms and pipelines Israeli Prime Minister Benjamin Netanyahu announced that Israel began pumping that gas from the Mediterranean onto their mainland on March 30, 2013. Finally, after 4000 years, Moses’ treasure code was cracked! Israel has its “treasures hidden in the sand” and its “abundance from the sea.” And this tiny nation is fast on its way to becoming energy independent!

There is little doubt that these natural resources coincide with what the Prophet Ezekiel saw as the linchpin for the Battle of Gog of Magog. But the Lord has a surprise awaiting Gog and his confederation and it’s one that will shake the foundations of the world. This Battle of Gog and Magog, which the Bible describes in graphic detail, is nearing fulfillment. And as you understand its many secrets, you’ll discover it is unquestionably the linchpin of all last-hour prophecies. You can find out more by ordering the Studio DVD production entitled, “The Amazing Secrets of the Battle of Gog and Magog” on the RESOURCES page.