Prayer is not a “one-size-fits-all” approach to God. They do not look alike, sound alike, or even produce the same result. A variety of style, cadence, quality, and disposition exist within the construct of prayer. That means, when the writers of Scripture identified the circumstances that demanded prayer, they also unveiled the various ways God designed for approaching him. Thus, Christians are not simply called to pray they are called to pray correctly!

Suppose during the course of a week someone needed the services of a judge, a financial officer, and a lifeguard. Would the manner in which these persons were approached matter? Yes! And one’s approach to each of these persons is based upon rank and reason. Appearing before a Judge requires respectfully presenting one’s case by securing a principle of law. Negotiating with a financial officer requires proof of repayment. And when a lifeguard is needed, nothing matters more than vociferously attracting the lifeguard’s attention regardless of the clamor.

Although I have discovered 27 Biblical models of prayer, these models are not formulas, rituals, or “recipes for success.” Prayer is not successful because one calculates the right approach to God and chooses the right words, it is effectual because right-hearted people, personally acquainted with God, approach him in faith, knowing that he “rewards those who seek Him” (Hebrews 11:6). This is what allows people to draw near God, touch his heart, and move his hand.

The following pictures, taken directly from The Diversity of Prayer, provide an overview of some insights revealed in the booklet: 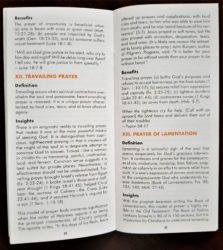 Click here to order The Diversity of Prayer in single copies or bulk.