It begins with deception—mass, unbridled deception! It is the infamous Endtime caveat that prevails above all others. In total, Christ and the Apostles warned of deception thirty-seven times and cautioned that it would infest every layer of life during the Last Days. We are no longer waiting for the fulfillment of this prophecy, it has come to pass! The deception that slithered into the Garden now infiltrates the earth. Among those most deceived are world rulers, cultural elites, the media, and secular educators. Satan has succeeded in casting his spell of humanism, evolution, and universalism—principles that (1) contradict Scripture and (2) reject the preeminence of Jesus Christ. And these two tenets embody the “spirit of antichrist” that the Bible indicates will reign supreme during the Last Days (1 John 4:3).

It is alarming to observe the ease by which mankind will succumb to the Antichrist at the Endtime: First, the Bible depicts people willfully rejecting truth. Second, this willful rejection of truth compels God to permit “strong delusion” (2 Thessalonians 2:11). This makes people doubly vulnerable! Then thirdly, the Antichrist appears. Notice the calculus that the prophet Daniel uses to summate the Antichrist: He says the Antichrist will “cause deceit to prosper” (Daniel 8:25) and “succeed through intrigue” (11:21). Thus, this grand deceiver will effortlessly wrest control of the world and mislead the masses. You see, the ultimate danger of deception is the fact that the deceived know not that they are deceived! Deception paves the path to the Antichrist’s rise to power.

Next, notice how calamity will work into the Antichrist’s favor. When Jesus forewarned of the Endtime he issued a vivid description of wars, natural disasters, diseases, famines, pestilences, and great signs in the heavens. In other words, a host of catastrophes will suddenly converge upon the four corners of the earth in rapid-fire succession. All will occur during a relatively short slice of time!

Can you imagine five or six mega-earthquakes suddenly striking the globe? Picture wars, rioting, and religious uprisings breaking out. Envision plagues of viruses infecting millions, along with a meteorite slamming into the planet. This convergence of cataclysm is what Jesus called “birth pains” or “contractions.” Do you see how this will set the stage for someone offering solutions to a world in crisis? Catastrophe makes people eager to accept help from anyone. The only problem is, this “anyone” will be the Antichrist.

The Prophetic Signal of 2020

During 2020-21, Americans witnessed the world’s reaction to one virus—COVID—19—plaguing mankind. And it is startling! I want you to consider some of the proposals from politicians, the Deep State, and the world’s elite during this pandemic:

There was a call for an International Monetary System—perhaps initiating crypto-currency on a global basis.

We heard some demand a World Tracking System to surveil the movements of all people.

Some state Governors ignored the Bill of Rights and deliberately infringed upon civil liberties.

Americans willingly allowed the expansion of “Big Brother” and its unnecessary encroachment of watching us. There were citizen “watchdogs,” with neighbors spying on neighbors.

What remains disturbing was and is the attempt of the Ruling Class, the elites, news agencies, and Big Tech to silence the voices of people that oppose their liberal policies.

Consider something, saints of God: one plague–the Coronavirus–produced an ever-widening control system that impinged upon personal freedoms worldwide! Consequently, this is what I prophetically sense about this scenario: What happened in 2020 with COVID—19, is but a microcosm of how the world will react during the Endtime! It was nothing less than a “dress rehearsal” for the days of the Tribulation.

If the foregoing infringements were levied against people from one pandemic, then imagine the suppression the Antichrist will impose upon people after a profusion of plagues and cataclysmic events bombard this planet! In the coming days, when chaos erupts, people will be predisposed to abdicate personal freedom and accept whatever policies may be demanded by the Antichrist.

Jesus, the Apostles, and the Prophets have delineated the future with incredible clarity: Bible truths will be rejected; deception will permeate the globe; chaotic contractions will create unprecedented fear and hopelessness, and thus solutions will be needed! It won’t be enough for the Antichrist to lead; his ultimate goal is to think for the world! And once delusion besieges the masses it will incapacitate their deliberative abilities and make it impossible to discriminate truth from error. Thus, the Antichrist will answer the call, rise to power, and plunge the world into the Great Tribulation.

To read more Endtime Insights from Robert D Pace, you can purchase his intriguing book, APOCALERT, on the Resources Page of RevelationCentral.com 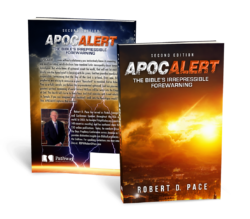