Nik Wallenda, a seventh generation funambulist, continues his acrobatics. He’s a 35-year-old devout Christian, who has spent the last 20 years skywalking with the world famous “Flying Wallenda’s,” whose aerial acts have been a family tradition since the eighteenth century. On June 24, 2013, Nik parlayed a 1400-foot wire across the Grand Canyon. The next year (11-2-14) he double-crossed Chicago skyscrapers, even finishing the last portion blindfolded. But Wallenda’s theatrics do not appear without moral implications. On the aforementioned performances he has defied heights by refusing safety nets or “second-chance” equipment. In case you might have forgotten about the network negotiations leading up to Wallenda’s walk across the Grand Canyon, one network bargaining for broadcast rights demanded that Nik strap on a safety device for the walk or the network wouldn’t broadcast it. Nik refused and that’s when the Discovery Channel seized the opportunity. If network television had reservations of telecasting an event shrouded with death, shouldn’t Christians consider the moral implications of tight-roping 600-feet above ground without safety equipment? From a Christian perspective we must ask: Does such death-defying drama tempt God or is God pleased with it?

During the 23 minutes Wallenda shuffled across the Grand Canyon he repeatedly invoked Christ’s Name. Perhaps that annoyed some of the 13-million viewers, but in a recent interview Nik noted that Christ is a vital part of his performances and if viewers don’t like hearing the Lord’s name they can ‘click the mute button.’ Certainly balancing one’s self on a 3/4-inch wire suspended 635 feet high is no unrestricted place for whispering Christ’s name! Nevertheless, the question remains: Do such safety-net-less, “back-up-less,” death-defying acts violate Deuteronomy 6:16 and Matthew 4:7 that say, “Thou shalt not tempt the Lord thy God”? 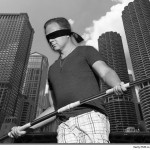 Nik Wallenda has honed his skill and as a highly trained professional it’s safe to say he is unrivaled in his profession. But what does this mean? Does his training, pedigree, and successes qualify him to tower over caverns of death and challenge them to defy his skills? The moral issue is this: when people engage in unwarranted, gratuitous bouts with death it defies Scripture, and it is wrong! While God kept Daniel from being devoured by lions the Bible urges no one to break through the bars of a zoo and sleep with 400-pound carnivores. Hebrews 11:34 speaks of a grace to “escape the edge of the sword,” not the dare to place one’s head before its blade and somehow elude its consequences!

Notice a provocative passage of Scripture written 4000 years ago. Moses says in Deuteronomy 18:10,

”There shall not be found among you anyone who burns his son or his daughter as an offering, anyone who practices divination or tells fortunes or interprets omens, or a sorcerer (11) or a charmer or a medium or a necromancer or one who inquires of the dead.”

Perhaps you wonder how this ancient admonition applies to a professional that slides over Canyons and Skyscrapers without backup devices. Moreover, let’s look deeper into that passage of Scripture: Four times Moses speaks of flirtations with death. He mentions: (1) parents sending their children into the fire; (2) snake charmers; (3) necromancers; and (4) those that “inquire of the dead.” Extrapolating from these 4 admonitions is clear: Moses denounces any attempt to conjure death and elevate it to the stage of amusement!

Didn’t Moses realize how death stirs man’s curiosity? It’s entertainment at its finest! Yet Moses forbade cavorting with death! And it’s obvious why: Death, throughout the Bible, is portrayed as man’s enemy (1 Corinthians 15). We must always remember that God’s grace appeared through Christ to conquer death; not dance with it! No acrobat should conclude Ezekiel’s directive to “stand in the gap” somehow involves a stroll over a chasm (Ezekiel 22:30).

Finally, Nik’s presentations must be weighed against what others might be compelled to attempt. Could his actions encourage teens to attempt death-defying stunts while invoking Christ’s protection or calling for angels to “take charge over” them? We must remember that our behavior affects the behavior of others. Even though Nik’s death-defying drama is played out through a man that clearly loves God, the Bible instructs people to avoid flirtations with death; not attempt a balancing act over it.