For centuries, ministers have preached the message of Christ’s Return to earth, but is there compelling evidence that His Return is imminent? Extensive research of Scripture suggests the answer is, Yes! After preaching thousands of sermons for 25 years, today my passion concerns exploring the eschatological prophecies of the Bible. In this article, I present three noteworthy prophecies that bear convincing testimony to the nearness of the Second Coming.

1. Evidence for the Jewish Dispersion and Regathering into the Israeli Homeland. The Old Testament Prophets repeatedly foretold the dispersion of the Jews. Ezekiel said they would be scattered to the four corners of the world. History discloses an event called the Diaspora, in 70 AD, fulfilled this prophecy when Rome invaded Jerusalem, destroyed the Temple, and scattered the Jews into the world—133 nations in all! But the Prophets also predicted that Abraham’s seed would be gathered and resituated into their homeland—something unprecedented in world history! Ezekiel 38:8 says: “After many days you will be summoned; in the latter years you will come into the land that is restored from the sword . . . its people were brought out from the nations.” Both astounding aspects of this prophecy have occurred and should not be ignored! First, in 70 AD the Jews were scattered from the land of Israel. Second, the Jews have regathered into Israel. This dispersion and regathering spanned over 1,910 years—and all in accordance with God’s immutable Word! Further, since the early 20th Century the world has witnessed a continuous wave of immigration that includes 5.1 million Jews returning to their homeland! Even so, Isaiah promised: “He will set up a banner for the nations, and will assemble the outcasts of Israel, and gather together the dispersed of Judah from the four corners of the Earth” (Isaiah 11:12).

2. An Identifiable Date for Israel’s Statehood. Isaiah 66:8 says, “Who has heard such a thing? Who has seen such things? Shall the earth be made to give birth in one day? Or shall a nation be born at once? For as soon as Zion was in labor, she gave birth to her children.” Once Rome destroyed Jerusalem in 70 AD, the Israelis were without a sovereign presence in their homeland for the next 1900 years. But something remarkable occurred on May 14, 1948. At 4:00 pm, Israeli leader David Ben-Gurion proclaimed Israel’s Independence, Britain relinquished control of the Jewish homeland, and Israel regained its Statehood. For the first time since 586 BC, Israel was again a sovereign State according to Bible prophecy. Minutes after David Ben-Gurion proclaimed Israel’s Statehood, US President Harry Truman welcomed Israel into the global community of nations. After 1,900 years of global absence Israel, the “Fig Tree,” budded and reclaimed its Statehood; and nothing like this has happened in world history! Jesus said this singular event would initiate His Endtime Time-clock as He said in Matthew 21:29, “Truly I say to you, this generation will not pass away until all these things take place” (Matthew 21:29-32). 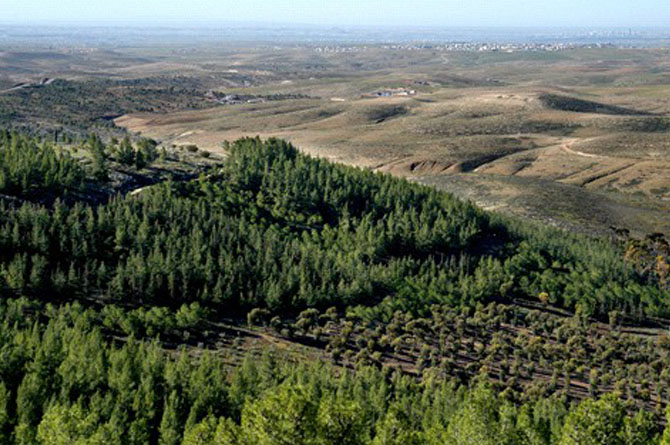 3. Evidence of Israel’s Forestation. This lesser-known, but highly significant, prophecy comes with a four-fold advisement as it unfolds. The Lord commands men to: (1) “see it, (3) recognize it, (3) consider it, and (4) gain insight.” The Prophecy says: The Lord says, “I will put the cedar in the wilderness, the acacia and the myrtle and the olive tree; I will place the juniper in the desert together with the box tree and the cypress, [Why?] (20) that they may see and recognize, and consider and gain insight as well, that the hand of the LORD has done this, and the Holy One of Israel created it” (Isaiah 41:19-20). The remarkable aspect of this “sign” is that Israel is 60% desert! Furthermore, when Isaiah uttered these words 2800 years ago, and long-before modern irrigation, it was unimaginable that this barren, desert wasteland would become a forest! But today, the Israeli government documents that Israelis have planted not 100,000, or 500,000, or even a million trees. Since the 1900s, the Israelis have planted more than 240 million trees! This is why the Lord advised mankind to recognize the significance of this “desert” prophecy when it unfolds. People should (1) “see it, (3) recognize it, (3) consider it, and (4) gain insight”!

Endnote
It is evident that Bible prophecies are steadily and sovereignly unfolding and neither Satan nor Man can obstruct their emergence! This is why Word Revealed Ministries emphasizes these ancient prophecies. Though penned thousands of years ago, they provide infallible proof that Christ will Return in this generation. It’s also why much of my labor involves researching and disclosing Endtime signs, wonders, and prophecies. It’s my purpose for traveling the nation and conducting Discern the Days Prophecy Conferences. If you are interested in hosting a Prophecy Conference you can view a two-minute video that captures a synopsis and then email me at: (RDP @ Word Revealed .com) Thank you!