THE CHRISTIAN’S RESPONSE TO TERRORISM

PROPHECY, Prophetic Insights, Prophetic Words Comments Off on THE CHRISTIAN’S RESPONSE TO TERRORISM 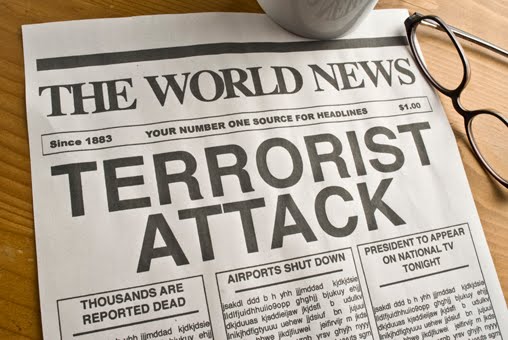 The safety of mankind is at stake! Isis, Al-Qaeda, Hamas, Hezbollah and the Taliban are advancing with a widening scourge across the globe. The savagery exists as a command from Allah, a god not of the Bible, that demands “infidels” to convert or die. Ultimately, these Islamic terrorists seek world domination, which left unchecked will establish a Caliphate and impose Sharia Law. As they continue to seize military equipment, these hate-filled monsters have littered the Middle East with a trail of beheaded bodies. Let there be no doubt: this is but a precursor of what other nations will soon experience. At present, the United States recognizes 64 Terrorist Organizations that pose a threat to our national welfare. More than 200 Terrorist Organizations exist worldwide.

If you have watched the countless news reports of terrorism you have likely been stirred in two ways: First, while you have felt roused to do something you have also felt powerless to intervene. Second, you have sensed that the Middle East is but a springboard for these terrorists, and their actions will somehow affect you. Make no mistake; they will! With over 1 billion followers, Islam can announce a Jihad (Holy War) and stir the wrath of its constituents at a moment’s notice. That means no one should remain apathetic! The good news is this: There is something you can do to hinder and even halt these misguided terrorists. Let me explain.

Most people reading this are not Presidents, Prime Ministers, or Government leaders. Such people have power to call for sanctions or military action against Islamic terrorists. While you may have little persuasion with government leaders you have someone far greater to whom you can appeal. You have persuasion with Almighty God! As certainly as Presidents are empowered to call for war, faith-filled intercessors can appeal to the Sovereign Lord to intervene.

There are several ways you can make a difference through the power of prayer:

1. As an individual, you can set aside a time during your day to pray against terrorism. You can take a moment during lunch to pray with colleagues or you can phone a friend and pray. Additionally, you can pray as you watch “Breaking News” of terrorism.

2. Pastors can designate a special time of prayer during worship services to pray against terrorism. “One can put a thousand to flight; two can put 10,000 to flight” (Deut. 32:30)

3. Presidents of Ministerial Associations can organize a citywide Call to Prayer against terrorism.

4. Ministries on the Internet can appeal to its viewers to pray.

Do not underestimate the power of prayer! While it contains no power in and of itself, prayer works because it is heard by the Living and Sovereign God—Jehovah. And God is waiting for His people to enter spiritual warfare through prayer in the name of Jesus, so that enemies of righteousness can be overcome.