Devotionals, POINT OF INSPIRATION Comments Off on BEGGARS OF MERCY 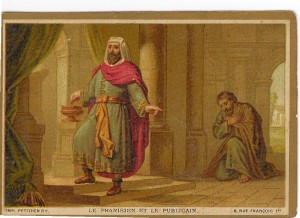 The story is familiar: “Two men went to the Temple to pray, one a Pharisee the other a Publican” (Luke 18:10). Jesus, the Master of Conversation, knew how to illustrate his point. Perhaps everyone in Jerusalem knew this Pharisee. His name glowed on the Temple registry and his benevolence was renowned among the poor. Thus, with a resume of platitudes, this grand Pharisee marched to the front of the Temple and presented them to God. How could the Omniscient Lord understand the grandeur of this Pharisee without this self-disclosure? Certainly the Lord was unaware of this Pharisee’s stature among men. And when God heard his narrative, it literally moved heaven—the wrong way! God recoiled and the angels retreated. It was “Pomp and Circumstance” of the wrong kind!

But standing far behind the Pharisee, at the back of the Temple, was a Publican—a man that made his living by fleecing the unsuspecting. He was a modern-day loan shark. And the commonfolks had euphemisms for him, tagging him with derision and insults. But there was something different about him today. Of all places to go, on this occasion he walks straight toward the Temple. Without swagger or conceit, he enters its doors and finds a place to pray at the back wall. His words emerged without pretense. Incapable of lifting his head, all the Publican could do was beg for mercy. This man, empowered by the sword of Rome, and who enriched himself by extortion, suddenly became a beggar. Without excuses, he admitted his wretchedness. He knew the crowds were right—he was reprehensible! That’s why he could only hang his head and gush with grief, “God be merciful to me a sinner.” Now bankrupt before God, he knew his only hope was mercy. And that’s why the atmosphere changed! God drew near and the angels regathered.

Regardless of who you are—wise or simple; righteous or a wretched; wealthy or destitute—the promise of God’s Word stands true: “a broken and a contrite heart, O God, You will not despise” (Psalm 51:17). While the proud one chases away God’s presence, the humble one plunders heaven of its most sacred treasure—mercy. Mercy rushes to the humble!

Finally, have you noticed the conclusion of this Parable? The Bible says the Pharisee left the Temple dignified; but the Publican left the Temple justified! That means, if you have needs, burn your resume, ignore your achievements, and become a beggar . . . a beggar of God’s mercy. In so doing, you will have access to everything you need. As Jesus promised, “Blessed are the poor in spirit, for theirs is the kingdom of heaven” (Matt. 5:3).