A BRAND PLUCKED FROM THE FIRE 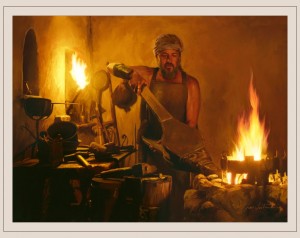 Near the close of the Old Testament, God ushered the Prophet Zechariah into a spiritual dimension revealing an indictment against the High Priest Joshua (Zechariah 3). Scripture doesn’t reveal Joshua’s sins, but we know this preeminent Priest, representing the nation of Israel, is described as “filthy” as he stood in God’s Court. It’s familiar that Satan, “the accuser of the brethren,” stood as the Prosecuting Attorney with the recriminating evidence. When you read this story—told in a mere seven verses—you discover Joshua is unworthy of continued service and must plead guilty to all charges.

Defenseless. Helpless. Guilty! The evidence mounted against Joshua when, suddenly, God interrupted the proceedings with a rebuke. But the censure wasn’t against Joshua; it was against Satan. Hear His words: “The Lord rebuke you, Satan! Indeed, the Lord who has chosen Jerusalem rebuke you! Is this not a brand plucked from the fire” (3:2)? While everyone in the courtroom saw Joshua sullied with sin, this was God’s Courtroom and the sentence wouldn’t be decided by the “burden of proof.”

As the Lord spoke, He demanded everyone to look closer at Joshua: “Is this not a brand plucked from the fire”?  God didn’t say Joshua was a “stick plucked from the fire.”  He wasn’t a charred piece of wood that had smoldered into uselessness. God identified Joshua a “brand”—an object designed to make a mark in life. While Satan wanted Joshua stripped of his dignity, God wanted Joshua stripped of his sin.” And with that the Lord said, “Joshua, I have taken away your iniquity and I am clothing you with festal robes.” Notice that! Joshua didn’t get an ordinary change of garments. The Lord re-dressed Joshua with “festal robes”—garments designed only for the High Priest. Joshua got his Priestly position back! By sovereign fiat, the Lord ordered mercy to triumph over judgment. He demanded Joshua’s purpose to remain unaltered.  As a “brand snatched from the fire” Joshua would again make his mark in life.

You see, this isn’t a drama made for TV.  It’s a drama made for real life! It’s for those irrefutably guilty! They are so guilty that not even a rigged jury could acquit them. And while we must never forget the consequences of sin, it’s important to know that God’s ultimate purpose doesn’t involve stripping us from our dignity, it’s to restore our usefulness. Thus, if you stand guilty before the Court of Heaven, cry for “Mercy”! It is mercy that re-clothes you with vestments of your original purpose. Remember God’s promise in Romans 11:29, “The gifts and calling of God are irrevocable.” You are a “brand plucked from the fire”!

HOW TO BEAUTIFY YOUR LIFE

Devotionals for Personal or Corporate Worship Robert D. Pace Johann von Dannecker was the famed German sculptor of the 19th Century. After carving many sculptures someone approached him and requested... END_OF_DOCUMENT_TOKEN_TO_BE_REPLACED